The SAIL project focuses on three main technical objectives that address the core of the observed trends. In short, it will provide a comprehensive, working solution for responding to these changes, by integrating a Network of Information and Cloud Networking with Open Connectivity Services.

SAIL deals with particular aspects of a real, complex network. The figure below shows how entities are all reflected differently in Network of Information, Cloud Networking, and Open Connectivity Services, yet all three aspects staying connected and in relation to each other. The figure also highlights that one expects the Network of Information and Cloud Networking aspects to appear multiple times, while the Open Connectivity Services one constitutes a single basis for the other two. 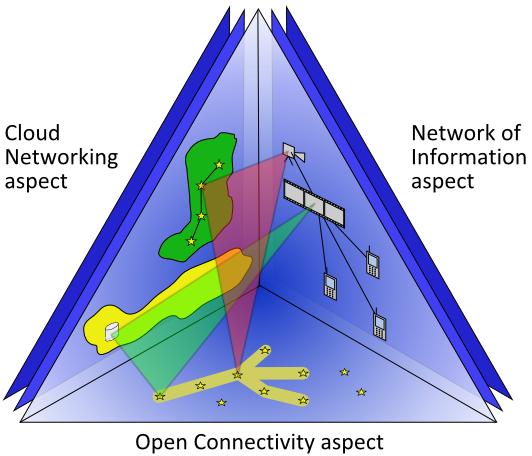 SAIL’s three main technical objectives constitute the three trends that lead to the Network of the Future.

In addition, there will be work as well on various cross-cutting themes (e.g., management, security, inter-provider and prototyping issues) that affect each of the broad technical areas, and will also ensure that standardisation and migration, socio-economics, business and regulatory aspects, and exploitation and dissemination activities are properly considered.